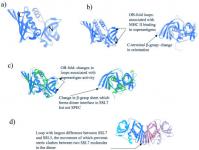 The staphylococcal superantigen-like proteins (SSLs) are a family of polymorphic paralogs encoded in the Staphylococcus aureus genome whose function is unknown. The crystal structure of SSL7 was determined and compared to that of SSL5 and that of a classical superantigen, streptococcal pyrogenic exotoxin. Although the overall architecture of the superantigen family is retained in both SSL7 and SSL5, there are significant differences in the structures which suggest that the characteristic major histocompatibility complex binding site of superantigens has been lost. To complement these data, the abilities of SSL7 and a closely related paralog, SSL9, to interact with cells of the immune system were investigated. In populations of human white blood cells, both SSLs interacted selectively with monocytes via specific saturable but separate binding sites, which led to rapid uptake of the SSLs. In addition, SSLs were rapidly taken up by dendritic cells, but not by macrophages, into the same endosomal compartment as dextran. The ability of these secreted proteins to target antigen-presenting cells may enhance a misplaced antibody response against the proteins, which may facilitate bacterial colonization rather than contribute to host protection. Like classical superantigens, therefore, SSLs may distract the host's immune system, but they may do so via entirely different molecular mechanisms. 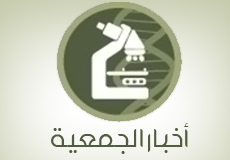 Earn up to 24 CME Credit hours accredited from the Saudi Commission for Health Specialities when you register at the Saudi Laboratory & Diagnostics Congress 2022. Register today: https://t.co/e1EpAJlaOV ...